On the left, Brian is receiving his 60 years’ Service Award in 2019. Until he passed away recently, he had spent an impressive 80 years in the Scout Movement. His Scouting years began at 1st Broughton, Preston, where he was a Scout, Rover Scout and Rover Scout Leader and then Leader Trainer (NW Lancashire). Although he started aged 8 there were no Cubs as there was a leader shortage due to World War II.

In the late 1970’s, following a period away from Scouting due to his active involvement in the Territorial Army, he became involved in 1st Southport Scout Group. He was an administrator on the Exec and then ASL, GSL and Group Chairman. He instigated the purchase of Pinfold Hall, the current group Scout HQ and led the largest group in the district, with at its height four Beaver Colonies, four Cub Packs, three Scout Troops and a Venture Scout Unit.

Brian later moved his focus to Scouting wider within the District. From 1993-2003 he was the project leader for the funding and re-build of Southport District’s Headquarters, now Waterside Lodge, following the arson attack which caused the previous “boathouse” to burn down. For much of this time Brian worked single-handedly on making grant applications to secure the £750,000 funding for the new build. What a legacy to leave! He was Chairman of Waterside Lodge committee for 10 years and then continued as a Director. 2002-2011 he was Chairman of Southport District Scout Council, and for a short period Acting District Commissioner. In total he was a member of the District Executive for 25years.

In 2007 Brian was privileged to be invited to attend the St George’s Day Parade at Windsor Castle to be presented with the highest award in Scouting, The Silver Wolf. BRAVO!!

On Brian’s passing his family has set up two fundraising pages in his memory and we invite you to look at them and donate if you feel inclined.

The first, Kandersteg International Scout Centre, representing his lifetime commitment to Scouting and lasting passion for the work of the Permanent Mini Jamboree in Kandersteg, Switzerland. If this one interests you then please visit www.givengain.com and search for Brian Robinson.

The other, Help for Heroes, represents Brian’s 30 years of army service, from National Service through to being Commanding Officer of the University of Liverpool Officers’ Training Corp with the Territorial Army. Donations to this cause can be made through: www.justgiving.com/fundraising/BrianEllwoodRobinson 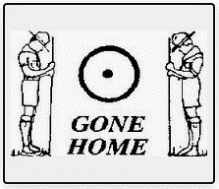 Getting you over the line with that Top Award

‘Scouting provides a second family to lots of young people. It’s a safe place where they can aspire and grow.'